When we launched the new version of ThinkShout.com last spring, something glaring was missing. That little something is what companies like Pantheon and Acquia have worked so hard to solve for more complex Drupal sites: an automated deployment workflow making it simple to push changes to your site and preview them before publishing to the production server. At the time of launch, we had some rudimentary tools in place, namely, a set of Rake tasks to build the site and deploy to separate staging and production environments.

This worked fine for the über-geeks among us who had a full Ruby stack running and were proficient using git and running terminal commands. But for those less technically-inclined, it was not so good. Not to mention the lack of automation left ample room for errors. The talented team at Development Seed created Jekyll hook, a node-based app that listens for notifications from GitHub and then builds and deploys the site based on a number of configuration options or customizations to the build script. That seemed like a good solution, and we even started work on our own fork of the project. It was moving along nicely, and we had it running on Heroku, which largely eliminated the need for maintaining a server. Our customizations allowed us to publish to S3 using the powerful s3_website gem and deploy to different buckets depending on the branch being committed to. Still, this solution required a good deal more care and maintenance than we were comfortable with, maintaining a separate build server, and lacked any built-in visual status or notifications.

Around the same time, I received a great tip while attending CapitalCamp: use Travis CI to test, build, and deploy the site. This was such a great idea that I literally slapped myself on the head for not thinking of it sooner. Travis is one of the leading continuous integration platforms, has tight GitHub integration, is free for open source projects, and charges a modest monthly fee for private ones. It’s also dead simple to configure, comes with loads of built-in features, and requires little to no ongoing maintenance. While I knew of Travis I didn’t entirely realize how powerful it was. Some highlights include:

The secret to all this Travis magic lies in a .travis.yml file located in the project root. For ThinkShout.com, it looks something like this:

I won’t go through this line by line, there’s great documentation for that, but basically this tells Travis:

The build script is very simple as well:

While we could put script commands directly into .travis.yml, having a bash script affords us some additional flexibility; in our case, to deploy to different S3 buckets based on the commit branch.

When all is said and done, we have a simple automated deployment workflow that looks like this: 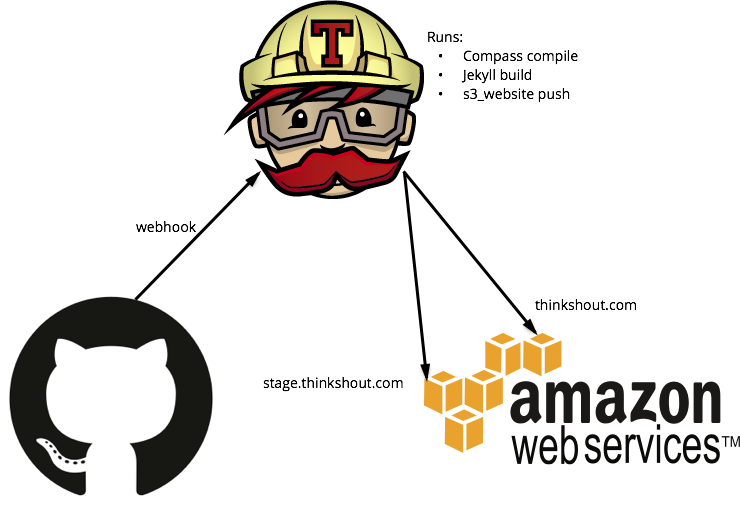 The explicit version of the workflow goes like this:

That’s it, done. No Ruby stack, no Jekyll build or Compass compile, no worrying about S3 access keys. We’re excited to refine this workflow further, including adding automated tests using PhantomJS, and put it to a real test for an upcoming site launch for a client. Stay tuned!