The Small Business of Open Source

This summer, ThinkShout was named the 9th Fastest Growing Private Company in Portland, Oregon. Admittedly, this came as sort of a shock to me and Lev. Over three and a half years, we’ve grown the company from two dudes renting desks in an incubator space to a full-time team of 17 professionals averaging 10 years of experience each. But most of the time, it doesn’t feel like we’ve come up with any secret sauce for running a successful business. We try to listen to our employees and our peers in the industry. We partner with nonprofit clients trying to make the world a better place, and we do our best to treat them with integrity in all aspects of our work - from our design and engineering practices to our approach to project management and our billing process.

Perhaps there are a few things that we do particularly well. We win our fair share of work in coopetition with our peers in the nonprofit tech industry. But then again, in talking with our friends at ZivTech, Gorton Studios, Aten Design Group, Jackson River, Forum One Communications, and others, what we consistently hear is that there is more than enough work to go around in the world of technology for good.

How is that? What are the mechanics of “the small business of open source” that work for all these firms and, more importantly, for their customers?

You could tackle this question from a number of angles. Conventional wisdom suggests that the business value of open source, both in the for-profit and nonprofit sectors, is simply: you get a lot of stuff for free. This is true. With open source, you avoid licensing fees. With an open source platform such as Drupal, you can pick and choose among literally tens of thousands of free tools and extensions.

But this perspective speaks only to open source’s initial customer appeal. It speaks to the coarse outlines of the sales cycle of open source. You can’t just build a sustainable business off the idea that a platform like Drupal provides a lot of stuff for free.

So, what is the guiding principle of growing a small business around open source? For us, it boils down to:

Our customers benefit tremendously from their own contributions to open source.

Our customers benefit from paying us to give away their code.

To illustrate this point, I’d like to run through some of our numbers as a small business of open source. The following statistics are relative to the publication date of this blog post:

Interestingly, our staff has grown 750% from the end of our first quarter. The growth in adoption of our contributed tools by the community (1,400% since the end of Q1 2011) tracks closely with the growth of our quarterly revenues (1,300%). 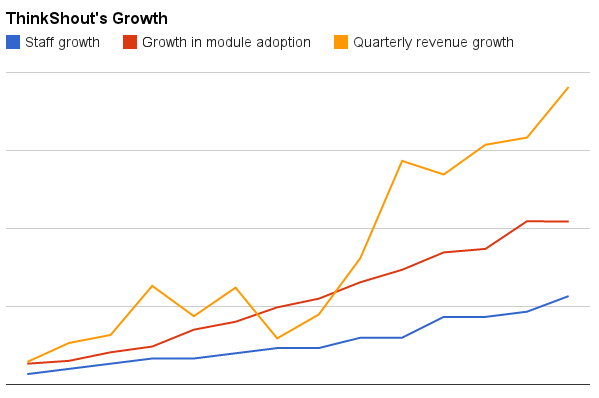 Obviously, these statistics are only related anecdotally. On their own, they don’t prove that our open source contributions drive our success.

Still, it is interesting to look at some of the statistics around our client work:

Of course, these statistics reflect the significant cost savings to our clients in going with an open source solution. They get a lot of free stuff…

But more importantly, our clients benefit from becoming financially invested in the direction and cultivation of these open source projects. By becoming committers, they are ensured that their requirements will continue to be prioritized in the future development of the modules their website depend on. They benefit too by the tens, sometimes hundreds, of open source developers reviewing their contributed code for bug fixes and improvements.

Moreover, by releasing the code that powers their websites, our clients connect with other organizations with similar requirements who, in turn, will often contribute additional features to these projects over time. As a case in point, we released the Leaflet module, a web-based mapping solution, on behalf of the Intertwine Alliance in the summer of 2011. The Alliance paid for the initial release, which included a modest yet highly-innovative feature set. Since then, 36 different Drupal developers have contributed code to improve the module, and over 4,500 websites have adopted it.

Similarly, we initially released RedHen CRM, a native CRM solution built entirely within Drupal, for a small cohort of nonprofits with similar needs. In this case, we actually got these nonprofits to work together to brainstorm and prioritize their CRM requirements. Pooling funding, this group helped us launch RedHen publicly in the spring of 2012. Since then, over a dozen of our clients have continued to invest in RedHen, and it has been adopted on over 850 websites around the world. Most impressively, those initial clients that funded our early work on RedHen continue to upgrade their sites with each new release, benefitting from hundreds of thousands of dollars of free development.

Client investments in open source present many less tangible benefits as well. While our developers are inspired to support our mission-driven nonprofit customers, they are particularly excited (and therefore, keenly focused) when their work leads to open source contributions. Not only does this lead to high-quality engineering, it helps reduce turnover among our engineering team, which can be costly for clients. Among our team’s contributors to Drupal, our average turnover is less than half of the industry standard in information technology.

For readers of this post who represent agencies that also contribute to open source, I’d be curious if your data and experience track to ours. Business and nonprofit readers whose teams have paid for open source contributions, I’d be curious to hear your stories as well. After all, open source is all about transparency, which we believe makes us a more effective business.