Under the Hood of RedHen CRM

RedHen CRM is one of many great stories featured in the Linux Journal’s recent Drupal special addition. RedHen just laid a beta3 release and the ThinkShout team will be at the Pacific Northwest Drupal Summit if anyone wants to connect.

This is the 5th in a series of articles exploring RedHen, ThinkShout’s native Drupal 7 CRM platform. ThinkShout initially designed RedHen CRM around the complex association management (AMS) needs of nonprofits and trade associations. These association management requirements go well beyond the standard needs of most CRM/CMS solutions. However, in building an abstract tool with these needs at the forefront, our goal has been to future proof RedHen CRM as much as possible to ensure that its architecture can accommodate a wide variety of use cases.

RedHen CRM is similar to Drupal Commerce in its modular structure. As with Drupal Commerce, the core RedHen modules that can be downloaded on the Drupal.org project page won’t provide you with a working CRM right out of the box. RedHen is intended to provide developers and site builders with the building blocks for quickly creating their own CRM data models that map to their particular business requirements and workflow. Consequently, setting up a new RedHen CRM instance does require configuration.

In the future, ThinkShout is likely to release RedHen “Features” or “Apps” that provide prepackaged CRM solutions for different use cases. At the time of the publication of this article, we know of more than 70 RedHen CRM solutions built by other Drupal developers and site builders.

RedHen CRM consists of a core module containing shared APIs and interfaces and a collection of feature specific sub-modules, including:

We maintain other functionality that is not needed for all uses cases in separate projects in order to keep the core RedHen code base as lean as possible. The RedHen Membership system is our most widely used RedHen component with its own project name space. It handles individual and organizational membership subscriptions. As with Drupal Commerce, key sub-modules will continue to be included with the main module code base. However, we anticipate that as the RedHen CRM developer community grows, we will see more and more contributed modules that extend RedHen’s core feature set.

The overall architecture of RedHen CRM consists of a set of minimalistic building blocks that developers and site builders can use to develop solutions tailored to specific use cases. Like Drupal Commerce, RedHen relies on Drupal distributions and installation profiles for the heavy lifting of fleshing out polished applications that serve specific needs. Nedjo Rogers of Chocolate Lily has incorporated RedHen into Open Outreach,

and ThinkShout has released it’s own demonstration of RedHen in the form of a distribution to server the needs of a fictional pet shelter association.

RedHen has minimal dependencies on other Drupal contributed modules, striving for a balance between relying on its own code base and leveraging other code where it makes the most sense. Beyond Drupal core, RedHen CRM currently depends only on Entity API, discussed in detail below, and the Relation module for managing connections. Additionally, RedHen Activity is based on the Message module which, by the way, does a great job of balancing a lean extendable base while still remaining accessible to site builders. RedHen CRM supports integration with popular contributed tools, like Views and Rules, but these modules are not required. This makes RedHen a lean and stable application platform, as it relies less on a shifting foundation of other contributed modules over which we have little to no control.

This centrist approach helps assure other Drupal developers that their customizations and extensions of RedHen won’t break due to fragile module interdependencies. At the same time, it provides less-technical site builders with a known approach to extending RedHen CRM with standard Drupal tools, such as Views, Rules, and the Fields API.

On a site note, Entity API has 133,647 reported installs all on Drupal 7 and is among the top 20 modules on Drupal.org. As Drupal dependencies go, it is highly stable and reliable.

RedHen ships with the following entity types, each of which come bundled with core properties and can be extended with additional user-defined fields. 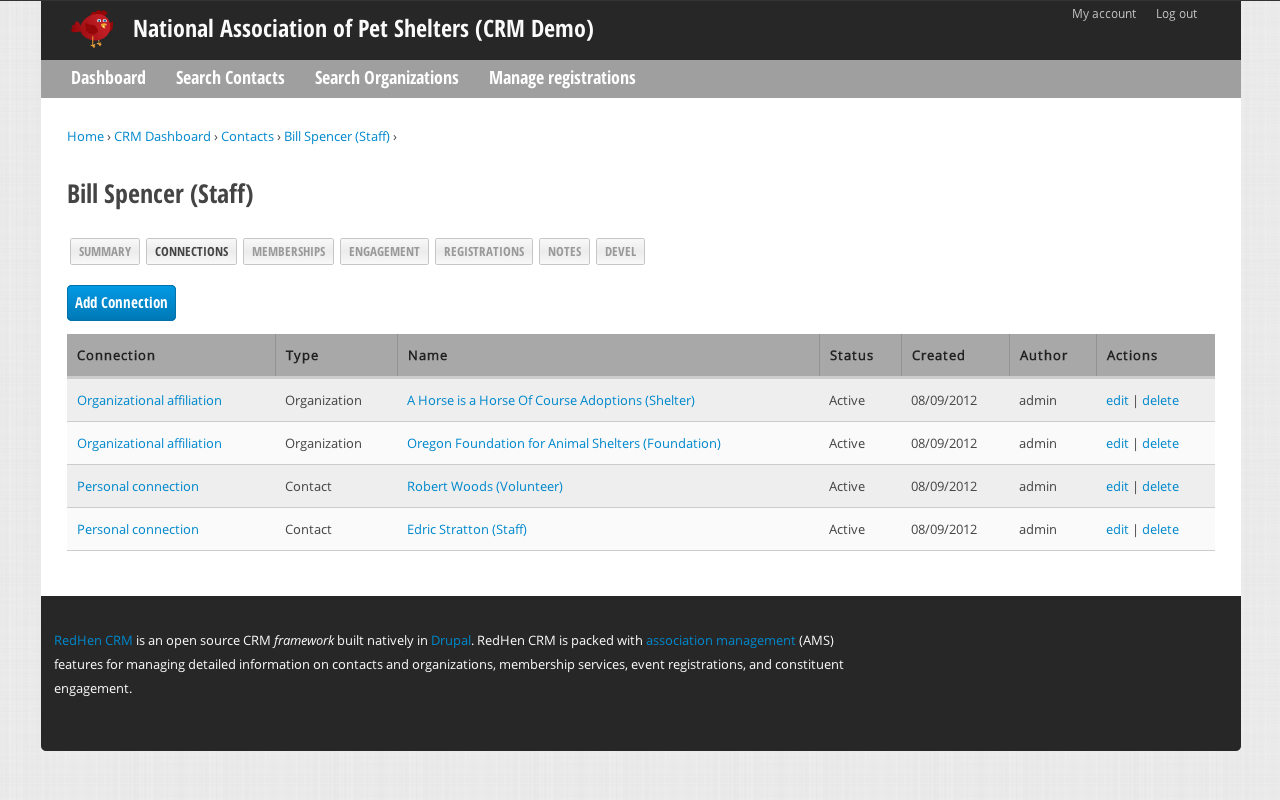 Listing of a contact’s connections

Playing well in the Drupal sandbox

RedHen’s default listings of contacts are a good start, but the fun really starts if you want to create your own custom views. The venerable Views module, a powerful graphical query builder, is the gold standard in Drupal for creating custom “lists of stuff,” including RedHen entities. Much of the heavy lifting involved in Views integration is handled by Entity API, but any module implementing the Entity API interfaces still needs to clarify the data types of all entity properties and provide Views handlers for any non-standard data. For example, organization entities have a primary contact associated with them and it’s up to RedHen to explain to Views that the related contact id within an organization record is actually a RedHen contact. Let’s create a new View adding additional fields and relationships to our standard list of contacts:

You now have a View of all contacts that includes their membership and organization. If you set the path of the View to /redhen/contact, it will simply override the default contacts listing, or you can move it elsewhere to maintain both interfaces. 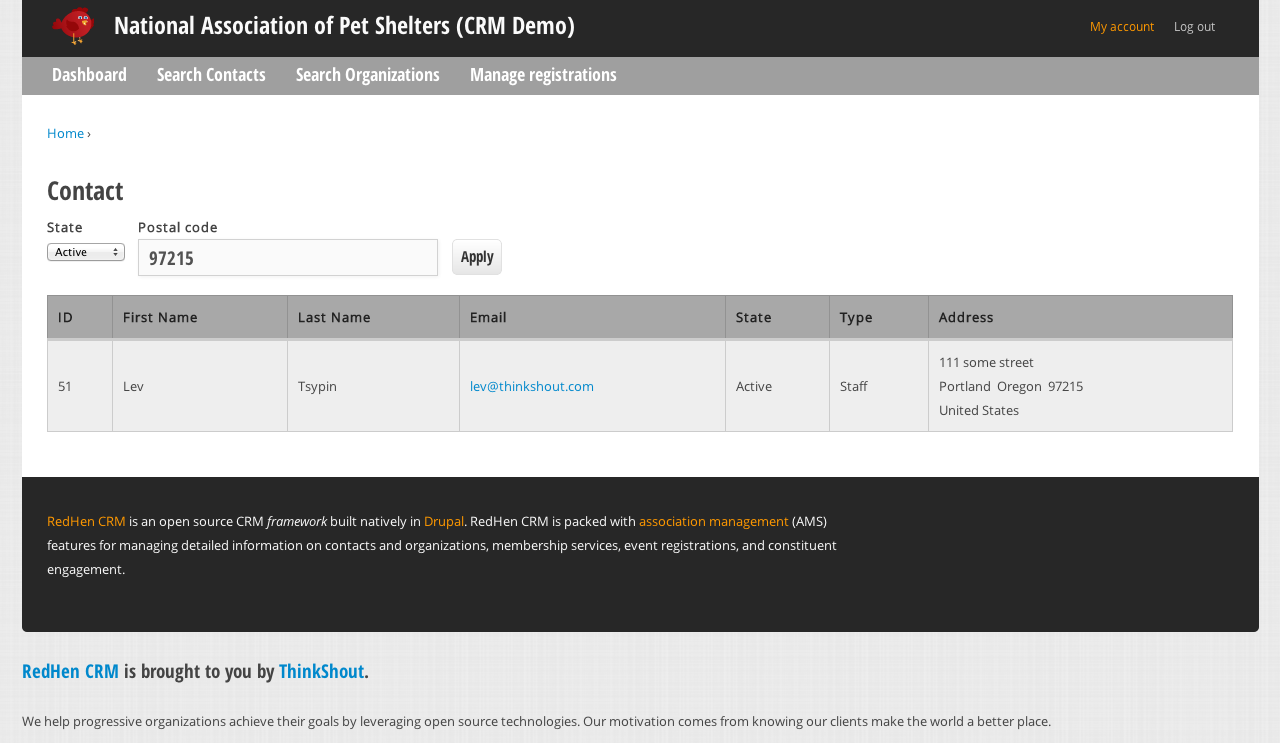 Custom contact view with an address and exposed filters.

Similarly, business rules can be extended using the Rules module, which provides an interface for defining logic based upon a trigger->action model. RedHen again leans on Entity API to expose RedHen entities into this model so that you can, for example, send an email to a contact when a related membership entity is updated. 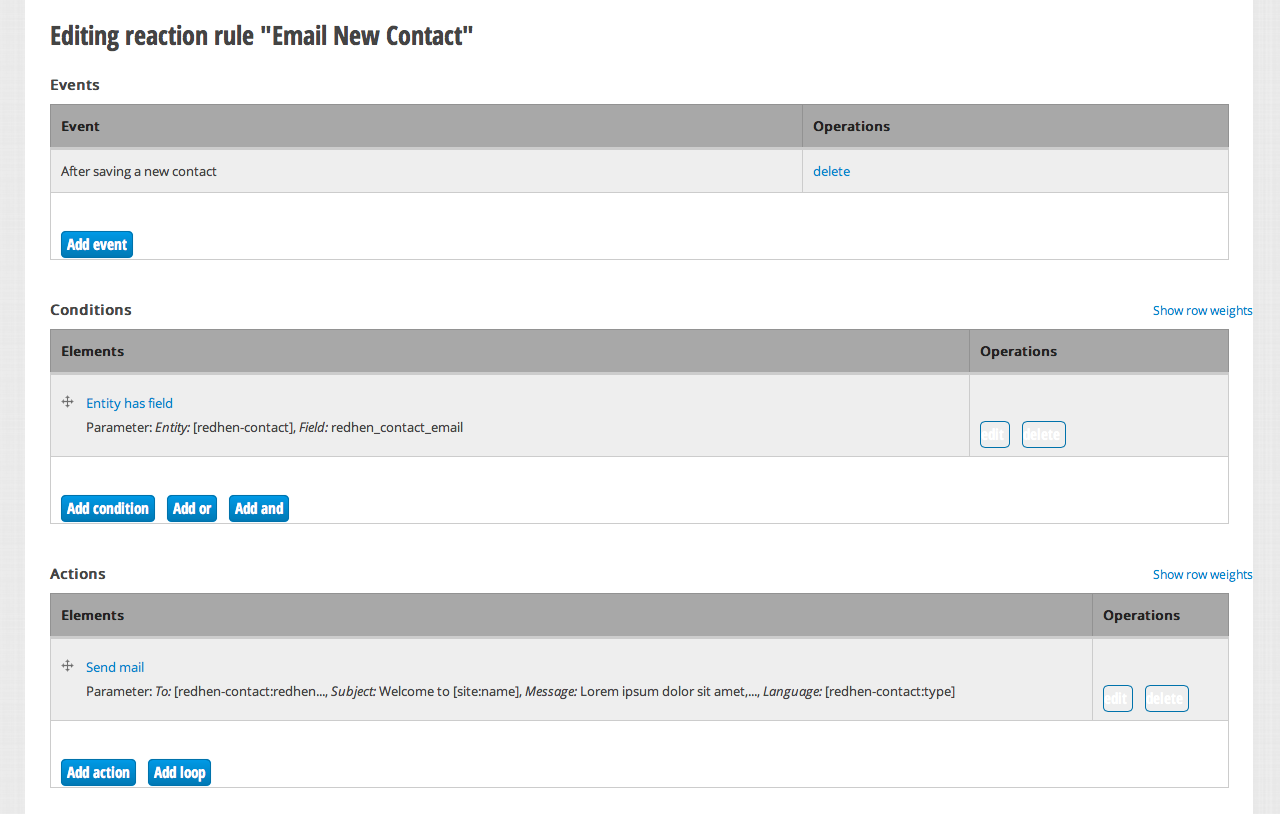 Custom Rule that demonstrates sending an email to new contacts.

RedHen can also be extended and customized the old fashioned way – by writing custom code. All of RedHen’s entity types feature APIs with standard CRUD operations and wrappers around many common tasks, such as getting all related entities. In addition, RedHen can be manipulated using Drupal’s hook system. Each entity can be altered using a hook implementation when it’s loaded, created, updated, and deleted. Most of hooks are exposed through Entity API’s inherited controller classes, but RedHen features some of its own unique hooks as explained in redhen.api.php. For example, a module can dictate whether or not a contact entity can be deleted by implementing hook_redhen_contact_can_delete():

In addition, all of RedHen’s main interfaces are wrapped in theme functions so they can be overridden at the theme level. For example, to alter the default list of contacts, implement theme_redhen_contact_list():

Tags: Drupal Give Drupal Planet RedHen
RedHen in the Wild: Mission Investors Exchange
It's that time of year again, BADCamp