Chimpfestation, A Closer Look at the New MailChimp Module

Right now, I am focusing on 3 types of integration:

The module (and the project page!) have both come a long way since then, but the functionality described in that initial post has remained the core of the module through each version: anonymous signup forms and authenticated subscription control describe the core use cases that have resulted in over 15,000 installs. Sure, there’s campaign integration, activity reporting, and all sorts of bells and whistles around list and subscription management, but anonymous signup forms and user-based subscription control have always been the bread and butter.

Building on the success of the MailChimp module, ThinkShout has made the contribution of robust, useful Drupal modules a core part of our business. In building Entity Registration, RedHen, Salesforce v3, Leaflet, and a bunch of other great modules, we’ve often leveraged Drupal 7’s Entity and Field systems to make our tools as versatile and abstract as possible, allowing for any imaginable use-case.

We had a bit of a wake-up call when one of our favorite clients, The Salmon Project, asked us to integrate their fancy new RedHen CRM directly with MailChimp. Integrating RedHen Contact Entities doesn’t actually match up with either of these: anonymous signup forms and authenticated subscription control.

The first thing we did was de-couple the configuration of anonymous signup forms and authenticated subscription control. The MailChimp Lists configuration UI had grown into a bit of a monster: it included 16 separate options, not counting merge field sync settings, ranging from the submit button label (on the signup form) to the roles allowed (to access the list on user configuration pages). For version 3, rather than framing everything around each list, we broke things out by their Drupal-side functionality:

What does this mean? If all you need to do is generate some anonymous subscription blocks or pages, the MailChimp Signup module has you covered. Just enable it, go to the “Signup Forms” tab in the MailChimp Admin UI, and create a signup! The UI lets you generate blocks or pages easily, include one or more lists on each form, pick which merge fields to include, and voila! 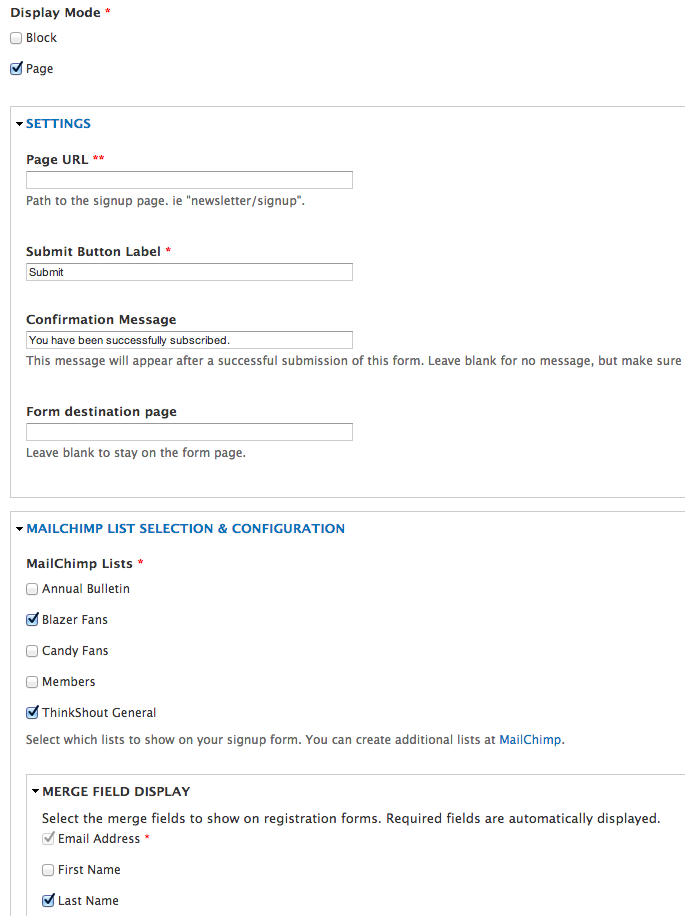 This handy MailChimp Signup field will insist on being tied to one of your MailChimp lists. Once that’s done, you can configure instances of this field like you would any other Drupal field. It will automatically pull in the available Merge Fields and let you select which properties or fields from the entity you want to push into these fields: 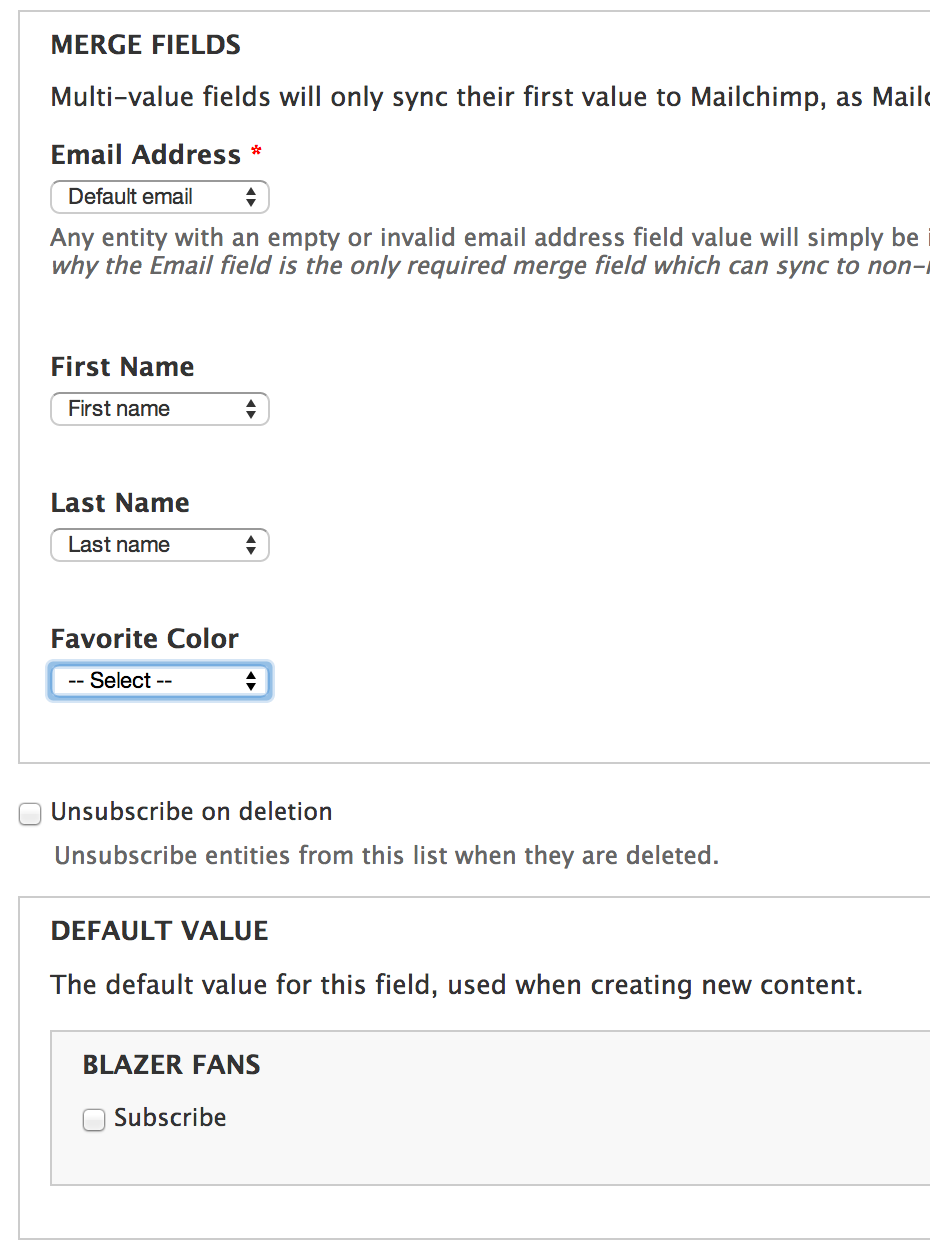 Want to default your entity to be subscribed to the list? Use field UI’s built-in configuration options. Use field display options to hide the field if you want to, or display it as a form right on the entity.

Do you want to get the old role-based subscription behavior? Easily done with a field on your user bundle and a simple rule or two! We’ve included the custom rules actions you need, and there’s even an example rule in the README file in the MailChimp Lists submodule.

What this all boils down to is do what you want! You can MailChimp-ify any entity on your site with an email address in under 5 minutes. So go ape!

ThinkShouter Dan Ruscoe brought huge improvement to the Campaign module, including the ability to send to list segments from directly within Drupal and some awesome UI improvements. We have long offered the ability to pull site content into campaigns, but you had to come up with the exact token for the content on your own: not the simplest task, especially if you have a non-developer creating your campaigns.

Now? A simple drop-down interface generates the token for you. Create a view mode for your entity types specifically for use in campaigns, or re-use an existing view mode. Just select your content type, the view mode, and search by title, and the module generates the token. Pop it into your campaign anywhere you want.

We also added a handy mergefield key selector patterned after the Token UI.

We didn’t stop with fancy configuration options. Heck, we didn’t start with fancy configuration options. The goofs at MailChimp HQ released the 2.0 version of their API, and we wouldn’t want you using that Late Pleistocene 1.x nonsense, so we re-wrote the entire core of the MailChimp Module to leverage the new API. While we were at it, we re-wrote the asyncronous functionality to make it much simpler and less error-prone. It may not be easy enough for a chimp to understand quite yet, but it’s certainly more tolerant of a little monkeying.

You can download the MailChimp Module 7.x-3.0 beta now. We’re already using it on a few sites and it’s working great. So give it a try and let us know what you think!